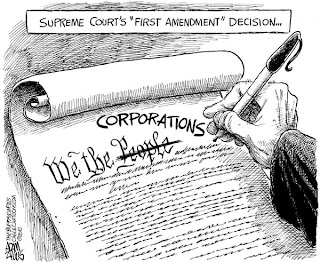 On the eve of the November midterm elections, Koch Industries sent an urgent letter to most of its 50,000 employees advising them on whom to vote for and warning them about the dire consequences to their families, their jobs and their country should they choose to vote otherwise.

The Nation obtained the Koch Industries election packet for Washington State—which included a cover letter from its president and COO, David Robertson; a list of Koch-endorsed state and federal candidates; and an issue of the company newsletter, Discovery, full of alarmist right-wing propaganda.
Legal experts interviewed for this story called the blatant corporate politicking highly unusual, although no longer skirting the edge of legality, thanks to last year’s Citizens United Supreme Court decision, which granted free speech rights to corporations.

Read the article HERE
Posted by Unknown at 8:20 PM