The Hog Farm is an organization considered to be America's longest running hippie commune.
The Hog Farm started out as a communal pig farm in California;
its members eventually bought land next to a Hopi Indian reservation in New Mexico.
Its leader was a skinny, toothless hippie whose real name was Hugh Romney.
He was a one-time beatnick comic who had changed his name to Wavy Gravy
and held the wiseguy title of "Minister of Talk".
With beginnings as an actual collective hog farm in Tujunga, California,
the group, founded in the 1960s by Wavy Gravy,
evolved into a "mobile, hallucination-extended family",
active nationwide in both music and politics.
The Hog Farm is perhaps best known for their involvement with the Woodstock Music Festival.
While lodging on Manhattan's East Side from 1968-69,
the Farm was approached by Woodstock Ventures with a proposal —
participate in a planned music festival in upstate New York.
Woodstock Ventures billed the concert as a "weekend in the country" - temporary commune.
The ads ran in the newspapers, both establishment and underground,
and on radio stations in Los Angeles, San Francisco, New York, Boston, Texas and Washington, D.C.
"We brought in the Hog Farm to be our crowd interface," Goldstein explained.
"We needed a specific group to be the exemplars for all to follow.
We believed that the idea of sleeping outdoors under the stars would be very attractive to many people,
but we knew damn well that the kind of people who were coming had never slept under the stars in their lives.
We had to create a circumstance where they were cared for."
Although the Farm had just bought land in Llano, New Mexico, near Truchas, New Mexico and the commune had plans to depart New York City and settle in Llano, they accepted the offer to become involved with Woodstock. Recruited to build fire pits and trails on the festival grounds at Woodstock, the Hog Farm convinced the promoter to let them set up a free kitchen as well.


Just prior to Woodstock, the Hog Farm attended the 1968 Democratic Convention in Chicago.
At the convention, the Farm and Abbie Hoffman presented a satirical presidential candidate,
a pig named Pigasus, who remained with the Hog Farm after the convention.
Upon returning to New York, they were met by the world press at John F. Kennedy International Airport
and told for the first time that they had also been assigned the task of providing security at Woodstock.

Gravy called his rather unorthodox security force the "Please Force,"
a reference to their non-intrusive tactics at keeping order ("please don't do that, please do this instead").
When asked by the press what kind of tools he intended to use to maintain order at the event,
his instant response was "Cream pies and seltzer bottles."
Shortly after Woodstock, the Hog Farmers helped keep the peace between the
cowboys and the hippies at the Texas Pop Festival,
where blues giant B. B. King gave Wavy Gravy his name.

Today, the Hog Farm is still in existence, with various locations including
a headquarters in Berkeley, California, and a 200+ acre farm in Laytonville, California,
known as Black Oak Ranch -- also home to Wavy Gravy's performing arts camp for children,
Camp Winnarainbow. Black Oak plays host to several music festivals each year,
most of which operate in support of charitable causes.
One such event is the annual Hog Farm Family Pig-Nic,
which has featured performances by artists such as Ben Harper, Spearhead, and others. 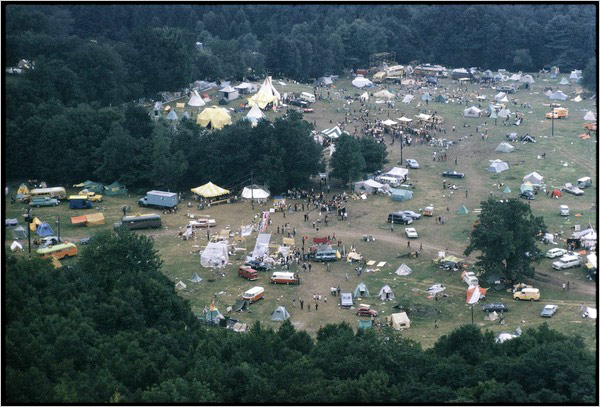 The Hog Farm Camp where two kitchens and food serving booths were set up, medical tips and the free stage. It became a safe and comfortable haven for hundreds of people and lots of little kids. Many used it for their home base. 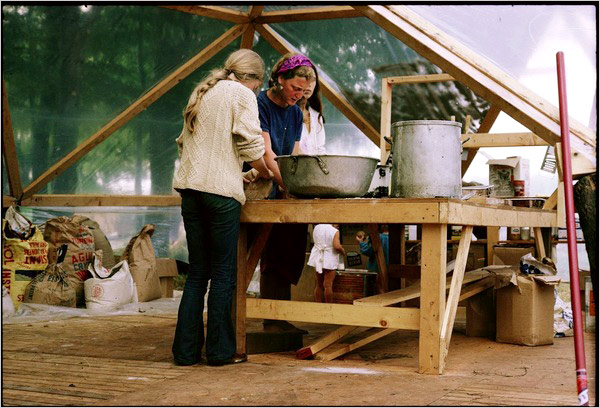 "The Hog Farm kitchen where food was prepared for all the people who arrived early and volunteered to help set things up at the Woodstock Festival. A flatbed truck was driven to the stage area and served granola to the masses in dixie cups. It was that philosophy of the Hog Farm, taking care of the crowd, making the concert free, the rain, and not busting anyone for drugs which allowed the concert to be peaceful."